Sometimes a great idea isn't your own. And lately another engineer has been beating me to the punch on my ideas. Dr. Drang (@DrDrang) has a recent post that covers the next area I was looking at in my iPad experiment - the power of the iPad vs the Mac. In Dr. Drang's post, he refers back to another post by David Sparks (@MacSparky) on David's thoughts about the iPad.

Dr. Drang commented on a relevant point from MacSparky's post that I'm currently working through as I migrate my workflows to my iPad:

But David’s point still holds: productivity tools on the iPad just aren’t up to the Mac standard. Editorial is no BBEdit. And no combination of Workflow and x-callback-urls can compare with shell scripting, AppleScript, Keyboard Maestro, Hazel, et al.

Sorry Apple, but THAT'S the bar that you've set for us to consider the iPad an alternative to our Macs. I've mentioned before that I kept using a Mac because of some very specific software that does not exist on the iPad. I've chosen to take on the idea of using an iPad as my computer because I believe I have the patience and skills to make it work. But when I look at my family and friends, I don't see how Apple can expect the normal consumer to make this leap.

Currently this is where I see the iPad sitting in terms of functionality between macOS and iOS. 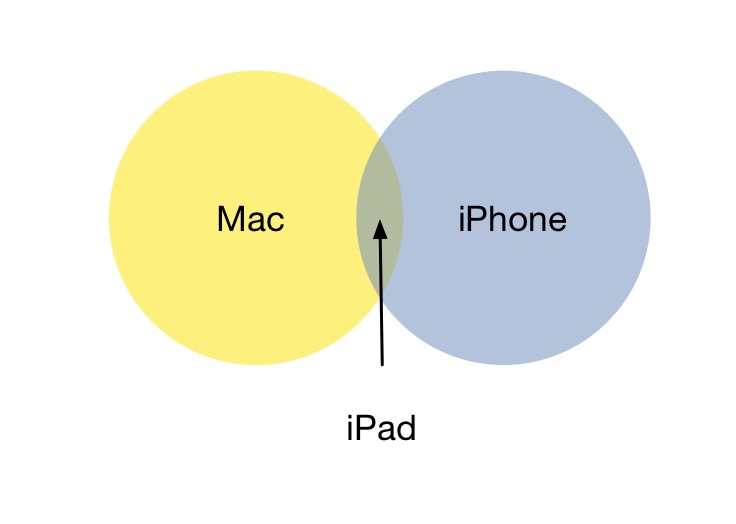 That's narrow band of functionality, but there's a lot of power in that intersection. I gain the intuitive interface of my iPhone and the underlying horsepower of a Mac, which is what I believe Apple is trying to make us believe on why the iPad is so great. The struggle with looking at the iPad as a laptop replacement is the extent a power user has to go to make it as nearly efficient as one or the other. I can thumb type on my iPhone, but can't on my iPad. So the logical choice is to use a keyboard with my iPad. 2

When I switch between my MBP and my iPad, I cannot tell you how many times I've tried to move my cursor on my MBP by touching the screen or thinking there's a trackpad when I'm using my iPad. So when Apple came out with the recent revamp to the MBP, and said Macs don't need touch screens1, I have to wonder if Apple's design teams are using the same tools as me.

The Microsoft Surface tablet is the best example of where I think Apple should be looking at how to evolve the iPad. The Surface has become the most requested computer in my company. Why? Because it has the functionality of Windows and the portability of a tablet. If a user wants to use a mouse & keyboard, they can. If they want to use the smart keyboard cover and pen, they can. It's the flexibility to cross over between how a user interacts with the device and giving them the standard environment that makes the Surface so appealing.

If Apple wants the iPad to be a real option as someone's main computer,4 the functionality diagram will need to look more like this: 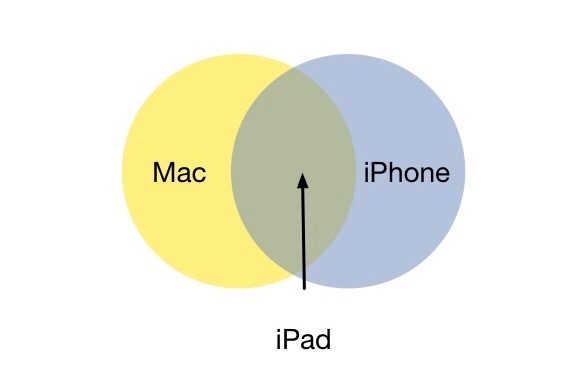 That means eating into the sales of both the Mac and iPhone line. Functional features on the iPad need to include trackpad support, better window/app management, and have split view be required for any iPad app.

As usual, Dr. Drang sums it up best:

The biggest problem for the iPad is Apple’s unwillingness to let it become its own thing. Development of iOS is driven by the iPhone, which probably shouldn’t have the tools of a regular computer. But the iPad needs at least some of those tools if it’s to fulfill Apple’s promise to be a laptop replacement. Being yoked to the iPhone is holding it back.

Here's to hoping Apple unleashes what the iPad could be with iOS 11. 🍻